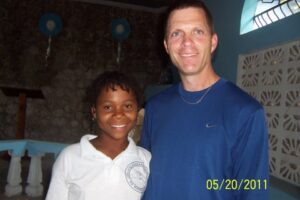 One day, while walking through the community of Montrouis, Dale Moyers ran into an eight year old girl, named Mole’ne. She was one of five children whose parents had just recently passed away. Her aunt, who he was already familiar with, took in two of the children, both girls. Already having five children of their own, the family could only afford to send one of the two girls to school. This meant that eight year old Mole’ne could not attend school. Instead, she would have to watch each day as her sister, and other children living in the community, went to school while she stayed home. This was a heart wrenching experience for Dale. The next morning he went by this little girl’s house and gave her a doll. This was the first time Dale saw her smile. It was important too that he find someone to sponsor this child. Now, because of the kindness and generosity of one sponsor, this little girl will be attending school and begin enjoying some of the things in life that sometimes we may take for granted.